If you have been charged with any degree of assault & battery, we want to hear your side of the story during our free initial consultation. We know that assault & battery cases are not always as cut and dry as they may seem.

At the Law Offices of Gregory I. McMurray, P.C., we understand each assault & battery case is unique and depending on the specifics of your criminal case, there may be motions that we can file to suppress certain evidence or get the charges against you reduced or dismissed. If necessary, we may be able to reach a plea agreement with prosecutors or we will aggressively defend you in court if your case goes to trial.

Assault and battery are essentially two distinct and very different crimes. Assault does not involve the act of physically touching.

Actions, such as clenched fists, display of weapons, or even verbal threats of violence combined with the immediate ability to inflict the threat of violence equates to an assault in the state of California. The assault can be simple-which makes it a misdemeanor or aggravated assault which is much more serious.

Battery requires a touching but does not require injury. The touching could be with hands or objects, such as bats, rocks, knives or any other instrument. Battery charges can be upgraded depending on the weapon used, the amount or extent of the injury, or the accused’s prior record of battery offenses.

In the State of California, these crimes potentially are a “strike” on your criminal record. This means that any earlier crime of which you have been convicted puts you in a position where you will have higher penalties. It is important that you retain an experienced and skilled assault & battery attorney to help you minimize the possibility of receiving any “strike” on your record.

There are a number of specific offenses relating to assault and/or battery to include the following:

You are innocent until the state proves otherwise. At the Law Offices of Gregory I. McMurray, P.C. we are ready to fight for your innocence in court. We are known for our effective legal strategies, which we customize to each case so that we can secure the best outcome possible.

We offer a free consultation to discuss your legal matter and represent clients throughout Santa Barbara County. With our experience and extensive knowledge in this field of law, we are able to provide high-quality representation even in the most serious of assault and battery cases.

Contact our office in downtown Santa Barbara to schedule a free initial consultation, either over the phone or in the office at 805-965-3703 or email us at mcmurray@mumurraylaw.us. 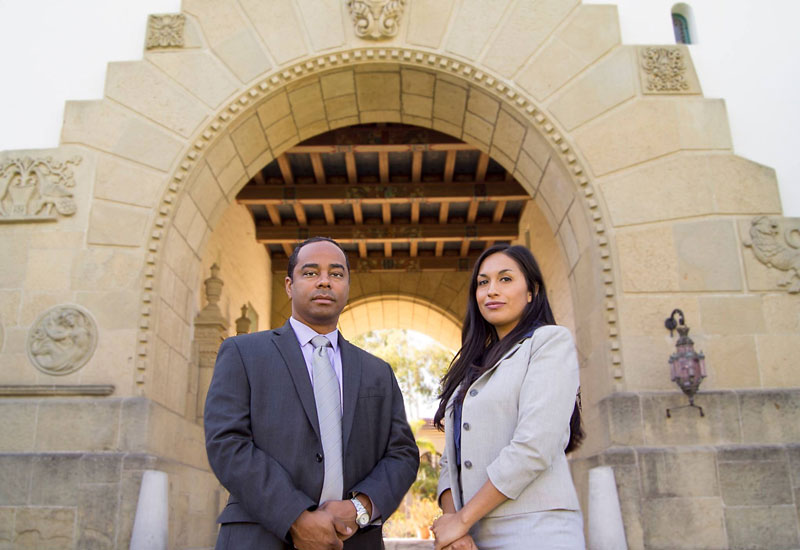 At the Law Offices of Gregory I. McMurray, P.C., we are committed to providing the highest standard of service. We understand that clients hire our firm for results, and they also expect quality service.

Our goal in each case is to exceed our clients' expectations. Our attorneys, Gregory McMurray and Elvia Garcia, are experienced trial lawyers who have been handling family law, criminal law, personal injury and estate planning cases for more than a decade. When you need an attorney, you'll be glad you choose us. We can be reached at 805-965-3703 or email us at mcmurray@mcmurraylaw.us .

Elvia is really responsible at her work she is very on it she does help you with whatever problem is going on in your case, she is an awesome attorney

I definitely recommend her she was very understanding in what I was asking for and will definitely get you granted what it is that your asking for. I am very satisfied with her work.

I couldn’t recommend Elvia highly enough. When the legal system left me hurt and confused, she fought fiercely and got me results.

Elvia believes in what she does and her passion shines through in her work. She couldn’t have done a better job for me and I know she’ll fight just as successfully for you.

Greg McMurray was recommended to us by colleagues/friends at a time of great distress. Prior to knowing him, we had the misfortune of dealing with several less talented and less ethical lawyers in Santa Barbara.

Greg’s general legal skills are impressive. Succinctly put, Greg’s pragmatic approach to the law is imbued with a profound sense of humanity and an undistracted drive for honesty and fairness.